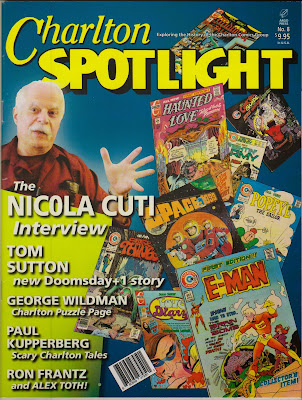 It's been a while, but Mike Ambrose and his Argo Press have finally delivered the new issue of CHARLTON SPOTLIGHT!
Was the insanely long wait worth it?--You bet! Mike has gone all out with this issue, bringing us another full color issue and on super-high quality paper stock.
Filling the pages (52 pages,plus covers, this time around) are some real treats.

Nick Cuti sits down with Donnie Pitchford for an extended interview. A few repeated stories (that's gonna happen, no matter who you interview) and some real gems and anecdotes that may not have seen print before.
Cuti also gives us 4 new cartoons of his The Weird Kids series (formerly known as The Weirdlings).

Paul Kupperberg relates a rather lengthy,enlightening, and at times quite funny, history of not only his beginnings as a writer at Charlton, but how Charlton and the writers and artists who worked there have remained a constant throughout his entire career.

Ron Frantz (of Ace Comics) reminisces about Alex Toth, with some real eye opening tales, that some may find surprising.As always, Frantz's storytelling is down to earth and conversational, and matter of fact in nature.

One of the highlights for me was an all new Hidden Objects page by George Wildman, with his first new Popeye art published in who knows how long! At age 86, he's still giving the fans wonderful art to admire and enjoy.

Then there's the news, added in almost as an afterthought, that Cuti and Joe Staton will finally be bringing to life the long ago abandoned/never realized project, MASTERMIND, originally created/designed by Cuti and the late Don Newton. Hopefully , we can look forward to seeing it in the pages of of issue #9.

This brings us to the true treasure of this issue: an unpublished 15 page DOOMSDAY +1 story, illustrated by the late,great Tom Sutton, and written by Nick Cuti, with colors by Donnie Pitchford and letters by Bill Pearson. Originally scheduled for print in 1979 it was scrubbed at the last moment, it finally sees print.
Truly a wonderful thing, and a joy to see after being shelved for well over 3 decades!

Highly recommended for any Charlton fan, and of fans of great comics and comics history in general. 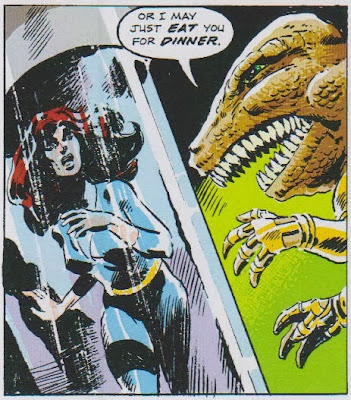 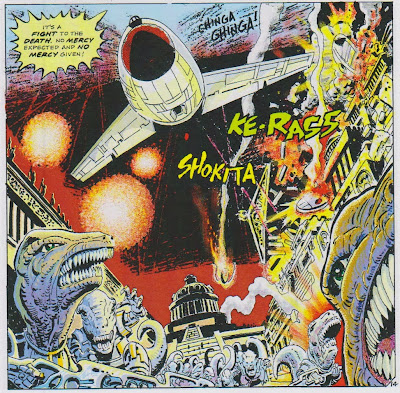 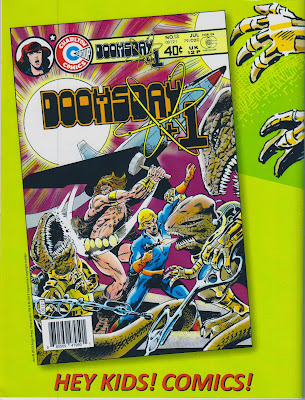