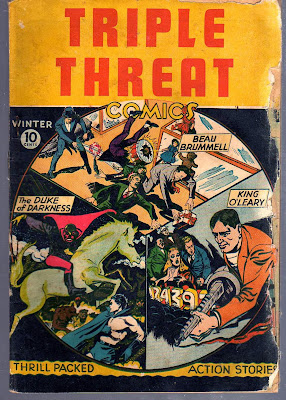 TRIPLE THREAT COMICS ,cover-dated Winter 1945, is an anomaly, and appears to be a "lost" and forgotten title in the annals of Chartlon history.

Charlton began their foray into the comics field with YELLOWJACKET COMICS #1 in September 1944, which was published monthly up to it's fifth issue in January 1945. During this time YellowJacket Comics was Charlton's sole title.
Then, for some reason, perhaps to assess the profitabilty and logistics of running a full time comics line or to accumulate material for additional titles, they suspended production of comics nearly a year, finally releasing ZOO FUNNIES #1 in November.
The following month saw the second issue of Zoo Funnies, and also marked the return of Yellowjacket Comics with issue #6.

Until only a few years ago Zoo Funnies,published by Charlton under a company shell name of "Childrens Comics Publishers", was thought to be Charlton's first comics title until an astute collector noticed the address of  Derby, Connecticut in the indicia of Yellowjacket Comics along with a known variation of Charlton's company name of "The Frank Comunale Publishing Company" thereby firmly establishing Yellowjacket Comics as the earliest known Charlton Comic by a full 14 months before Zoo Funnies. 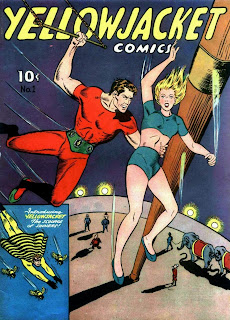 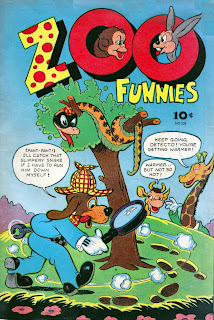 Nestled on the newsstand racks alongside Yellowjacket Comics and Zoo Funnies in December 1945 was another book, a 52 page one-shot title called TRIPLE THREAT COMICS. At first glance it's just another of the hundreds of other comics of the day from a small publisher getting it's feet wet in the still-new-but-already-booming comics biz.
The company name is attributed to Special Action Comics ,itself a supposed iteration of Gerona Publishing, and in archival/historical indexes such as The GCD/ The Grand Comics Database , The Digital Comic Museum , and Comic Book Plus , it is, in fact, listed as a Gerona comic title.
However, scrutiny of the indicia reveals something else entirely, and where things get interesting.

The first thing we see here is Holyoke. Nothing odd here as Holyoke was both a comics publisher and a comics printing sub-contracror, often printing titles (for a percentage of sales and adding their name to the indicia--a very shrewd legal move on their part) for other publishers when said company was unable to secure their regular presses or were in a tight deadline or some other bind. Holyoke had previously bought out or leased many defunct or bankrupt companies titles, such as Fox Features.
One of the legal loopholes that Holoyoke exploited from printing other company's titles was the somewhat cloudy appropriation of the right to continue publishing titles that were not really theirs. In early 1944 Fox sued Holyoke to return the rights to the powerhouse million-plus selling title of BLUE BEETLE, which had been published by Holyoke since issue #13 in August 1942. Fox quickly won their property back and resumed Blue Beetle in June 1944 with #31. Blue Beetle would, of course, tie this all back in when the title was bought by Charlton when Fox folded a second time, and the title was revived in 1955.

Triple Threat Comics would seem to be an instance of Holyoke assuming the mantle of subcontractor publisher for "Special Action Comics", given that this is a first issue/one-shot.
What's especially important is: just who was Special Action Comics? Despite being listed in the three most accurate and trusted databases/indexes as being an offshoot of Gerona, the address listed in the indicia tells us otherwise: 49 HAWKINS STREET, DERBY, CONN.
The very same address that was at the time the offices of Charlton.

This presents a bit of a mystery, as Charlton was an all-in-one publishing house which printed their titles on their own presses, thereby eliminating the need for outside contracting. Why they went to Holyoke for for this title is anyone's guess, and could be something as simple as a labor shortage or perhaps the presses were down. Perhaps it was a title they had previously had lined up and farmed it out during their comics line hiatus and was only just then getting released. This may be a puzzle that will never be solved.
At any rate, there can be no doubt that TRIPLE THREAT COMICS can now be counted as a Charlton comic, as the proof is right there in black and white.

[ *note: during my research I have found yet another example of a "lost" Charlton title, and will be discussing that title,along with Triple Threat, in an upcoming in-depth article for THE CHARLTON ARROW magazine.] 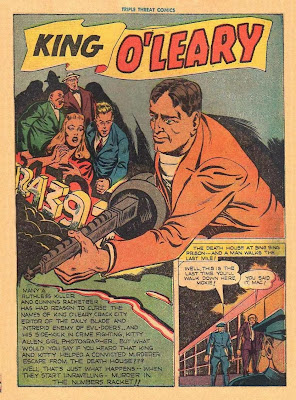 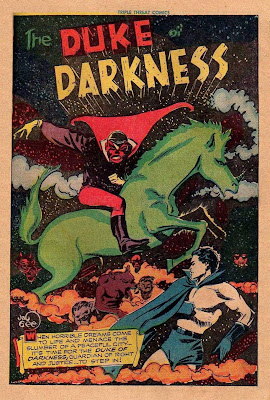 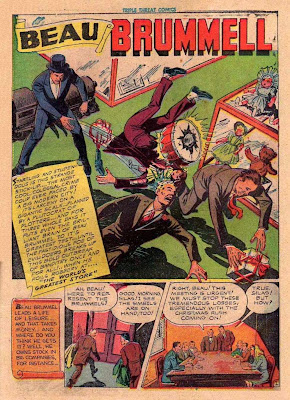 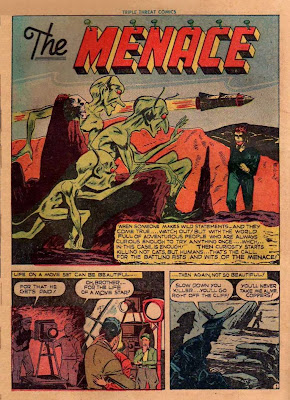 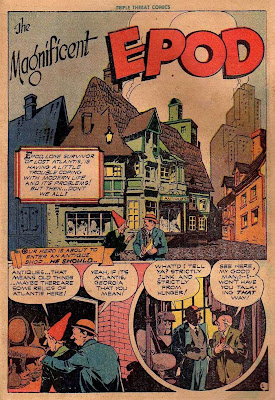 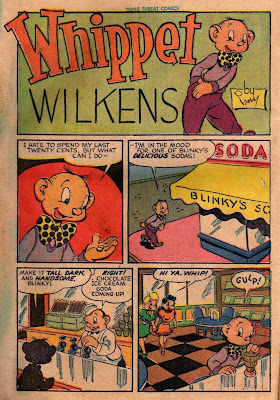