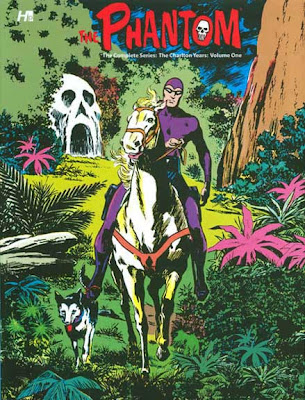 Hermes Press has begun the task of reprinting, in chronological order, the comic book tales of The Phantom. With two volumes of Gold Key issues, and a volume of King issues already released, we come to the first of several Charlton volumes.

This volume , The Charlton Years: Volume One, contains art mostly by Jim Aparo, but also includes a story each by Frank McLaughlin, Pat Boyette, and Bill Lignante. The scripts are largely written by Dick Wood, with an exception of a tale by Bill Harris.There is also an introduction by Christopher Irving, while providing some nice background information, it doesn't really expound on much more than any Charlton/Phantom fan would already know.
A few discrepancies occur within the book,most notably the attribution of Steve Skeates as the writer for the story "The Phantom's Death" in issue #33. I personally asked Steve about this story not long ago and he had this to say: "My name has somehow been connected with The Phantom for some time now! The thing is, I never did write a Phantom story!....much as I would have liked to!". Perhaps this is an oversight that Hermes Press can correct with later pressings.

The book itself is a sturdy hardcover, with a dust sleeve. The full color cover of the actual book is the same image as the jacket (the cover  of issue #38)--a nice touch that's a bit different than many other collections that tend to leave the binding a single color with just the title printed on it.The pages are printed on a nice slick/glossy paper stock.

Weighing in at a hefty 224 pages, the volume covers Charlton's first foray into the adventures of The Phantom, reprinting their first issue (#30) and continues up to issue #38, for a total of nine issues (sans any text stories and non-Phantom back up stories.)
The cover reproductions have been modified to omit the Charlton logo,price boxes, comics code, and any other extraneous items, leaving just the art and Phantom logo. 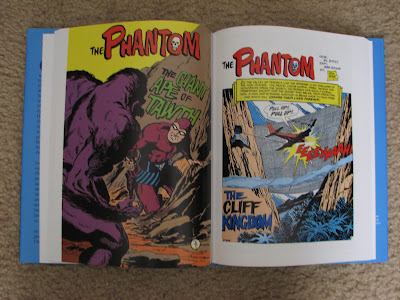 As with many reprint volumes of this type, digital color corrections have been made, and depending on your view of such things it either deters or adds to the reprint. In this case, the corrections can be jarring (although not entirely unwelcome) at times due to the original printings on Charlton's sub-par presses. An example: 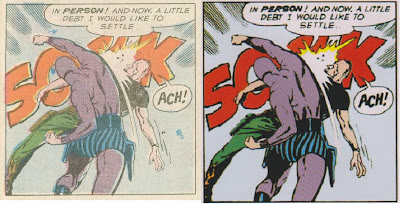 There is very little in the way of "extras" in this book, but there are 10 pages of original art reproduced, and that's always a plus. 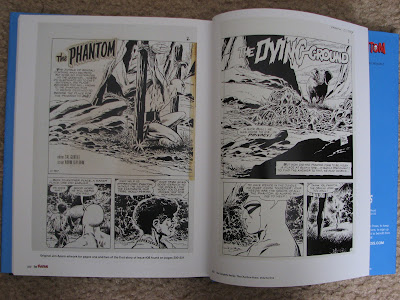 With a cover price of $49.99, the book seems a bit expensive, but with a little digging around you can find a new copy for much less. I was able to find a new/mint copy for around $25 on Amazon--a price much better suited to my wallet.